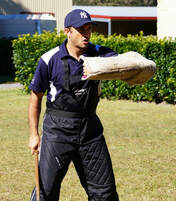 Lyle SLINGSBY is a man who has had his whole life involved with working dogs.

Lyle was born into a working Dairy farm situated in the Gold Coast hinterland at Beechmont. Lyle was taught the value of a true hard working working dog by his Grandfather Alf SLINGSBY and Dad Chris SLINGSBY on this very farm. Lyle's family always had three or four working dogs to help out on the Family Farm including Border Collies, Blue Cattle Dogs, and Kelpies. Lyle quickly learnt the difference of a good or bad working dog meant the difference of a good or bad day moving cattle.

The SLINGSBY family became well known for training and breeding working Dogs especially Border Collies with many of buyers of their  dogs travelling from far and wide to get a pup or young dog from the Bluestone Cattle farm. 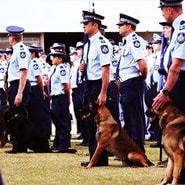 Lyle worked two Belgian Malinois "Pyro and Devil" in his role as well as a German Shepherd "Max".

Lyle's love for the Malinois and passion for dog training lead Lyle to the sport of Schutzhund. 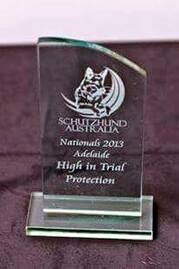 Lyle's love for dog training and the sport of IPO/Schutzhund lead Lyle to take on the role to develop and train interested persons in becoming both trial and training helpers.

With growth and development Lyle left the Gold Coast Sportdog club and started a new club where he was selected as the president and training director. In the first year of the clubs inception the club won the teams award (Cheryl Chaffy and Lyle Slingsby) for most points, High in trial protection with Lyle's own dog Kratos "Nordenstamm Panko and the HOT award again  with Lyle and "Kratos".

Lyle started breeding Malinois in 2011 and has self trained and titled his own dogs as well as assisting other dogs and handler of his and other kennels attain titles including National Champion.

Lyle has bred and trained dogs used in Military, Police, Corrections, Security, sport and the family environment. Lyle has a strong love for the Malinois breed and endeavours to breed the Malinois with its rightful characteristics as a true fit and healthy working dog breed.

In 2017 Lyle joined the Working Malinois Australia incorporated IPO and Mondioring organisation.  Lyle as well as training in IPO/Schutzhund Lyle also begun apprenticing as a decoy for Mondioring. Lyle was assessed by FMBB Judge to attain his Mondioring helper certification and licence becoming Australia's First and only dual IPO and Mondioring Helper/decoy. 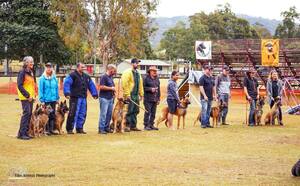 Lyle was honoured to be selected as a trial helper for the 2018 National Open IPO Championship and the Decoy for the 2018 Australian National Mondioring Championship with International Super Star Helper and Decoy Ronny Huemke and Sasa Ogenenovski.

In 2016 Lyle was selected as an apprentice judge for Schutzhund Australia and has recently been selected for an apprenticeship Judges position for the Working Malinois Australia Organisation. Lyle looks forward to this new challenge of judging.